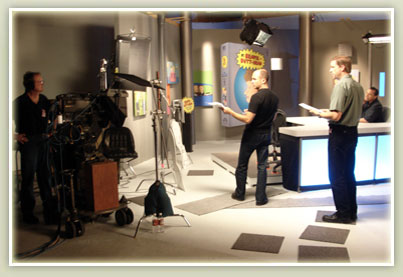 Mike Judge is a comedy legend. Often called a comic’s comic, he has created not one, but two legendary animated TV series. When MTV moved toward selling his famous “Beavis and Butt-Head” comedy series on DVD, they chose direct response as the marketing venue and gave him free reign to select the team he wanted. We are proud to say, that after a national search, he chose us as the company to produce and help him create the long-form infomercial.

But the first strategy question that came up was perplexing. A strong rule in direct response is you can’t be funny; people have tried it and simply doesn’t work. And yet Beavis and Butt-head are two of the most hysterical characters in TV history. They had to be funny! How do you sell a video series and still maintain the brand integrity? How can you be funny and still sell?

The solution was risky. Create a parody of an infomercial. On the surface, it looks like a classic “long form” format: an interview on a “news style” set. A live celebrity host, in this case Billy Dee Williams, interviews the two characters, and they answer his questions. But the questions he asked—and the way they answered—still used the key elements of the DR formula, but entertained the audience. Billy Dee interviewed the boys, clueless as ever, as if they were now elder statesmen. They looked back on their comedy series like it was something closer to The Masterpiece Theatre. Billy Dee: “What set the show apart?” Beavis: “I think it was the writing, Bill.”

What made this solution work was the core demographic understood it was a parody; it stuck close to the tried and true formula of direct response, and harnessed Mike’s humor in a very effective way.

The risk paid off.  Sales were very strong and it was a beginning for MTV to move into the direct response arena. Of course, it was an interesting project to create, an honor to be chosen, and was fun to meet and work with Mike, but the greatest reward is the success it created for our clients.