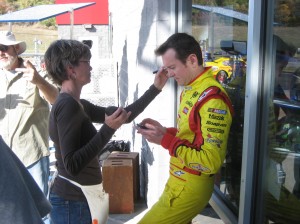 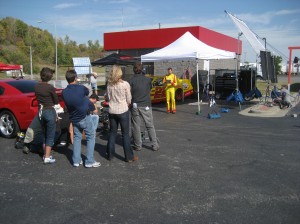 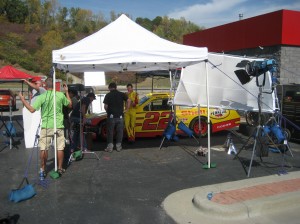 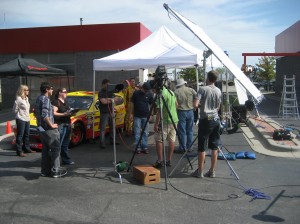 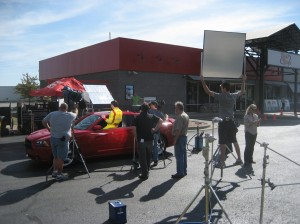 It was great to work for the NASCAR Media Group.  They are professional, knowledgeable, and—just as we expected of people from North Carolina—very polite.  We provided ground support for their team.  Apart from the folks from Shell, they brought director Burt Holland, camera team Al Francesco & Nicolle Lobell, and their deeply organized producer Gerry Martin.

Our team included local production assistance, audio recording, prop support, our famously strong lighting crew, and all the lighting and grip gear.  (We were very proud of our painted door.)  It’s always exciting to see the racecars roll-up and fun to see people’s reaction when they realize it’s not a prop, but a car that can actually take a spin around a track at over 160.

NASCAR Media Group was producing a promotional piece for Shell’s reward card and shot it at a local Shell Station in North Kansas City.  The concept was Shell’s sponsored drivers would “race” to an annual convention, and win by accumulating points on their cards.  It was funny to see Kurt Busch throw down bags of chips and an armload of candy bars to get his points.  He was great to be with, a good actor, and funnier than you’d expect a guy who gets paid to drive 200 mph might be.
A classic production moment occurred when our local producer asked a station patron to hold for a second while the talent cleared the shot.  The man said “of course,” and patiently waited.  He wasn’t expecting Kurt Busch to blow out of the front door of the Shell station and run to his waiting Dodge Charger.  The man muttered, “Well I’ll be jiggered.”  He looked at our producer and said, “that was worth the wait.”